Beyonce, 33, and Jay-Z, 44, have been tour for most parts of the year and they are now planning for a well-deserved break from it all, according to Daily Star.

The couple will however not be going back to one of their many homes in the United States – instead they will, for one year, live in a French castle by Chigny-les-Roses which is the same area where Jay’s champagne is made. It’s no secret that both Jay and Beyonce love France and the more laid back lifestyle they have there.

Jay and Beyonce will not just be lying in a sun lounger while in France. Sources tell the Daily Star that the main reason for spending the next year abroad is that they are planning for baby number two and they would like for him or her to be born in France. 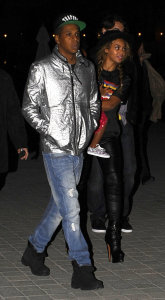 Brody Jenner Flips Out on Paparazzi in Australia

First Picture of Britney and Her New Boyfriend