Without any doubts, Beyonce was the big winner at yesterday’s MTV Video Music Awards 2014. The singer received four statues during the night, and she also shut down the divorce rumors, surrounding her and her husband Jay-Z.

Bey was joined on stage by her family, who presented her when winning the Michael Jackson Video Vanguard Award. Jay called his wife the “greatest living entertainer,” before the pair shared a kiss. “Yay, mommy,” her daughter yelled. 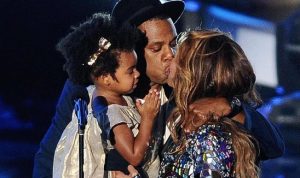