They were together for almost three years but it’s now over between Debra Messing, 46, and Will Chase, 44. A rep confirms the information to Us Weekly and tells the magazine that the two remain good friends.

Debra got her big break in the TV-series Will & Grace and she met Will Chase on the set of the now cancelled series Smash. They started dating during the production and they become an official couple shortly after the series was cancelled. 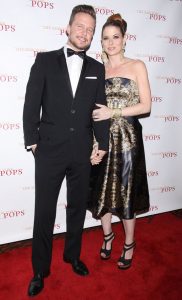 Kylie Jenner is Fed Up With the Gossiping About Her Lips