Lindsay Lohan is trying to quit smoking. The actress, who’s making her West End debut later this month with Speed-the-Plow at London’s Playhouse Theatre, wants to end her nicotine addiction

before the premiere. “Lindsay knows that all eyes will be on her and she’s worried that if she really starts to crave nicotine when on stage, it’ll put her off,” one insider tells The Sun. ”Some people may not believe in the powers of hypnosis or think it’s all about swinging a watch about, but Lindsay is willing to try anything to make sure she’s a hit.” Not only is she trying to quit smoking, she has also been hitting the gym lately in order to get in shape for the debut. 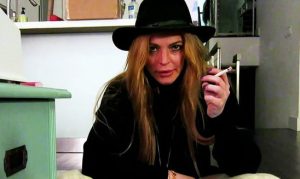 Jenner Threw Money At Waitress After Being Denied Booze