Jared Leto, 43, has, apart from his career as a musician and actor, become famous for his long hair and beard. The two latter are now a thing of the past.

To get ready for his role as The Joker, in the upcoming movie Suicide Squad, Leto went to the barber and his new clean cut look is diving his fans into two camps – those who hate it and those who love it.

What style do you think is a better for Jared Leto? 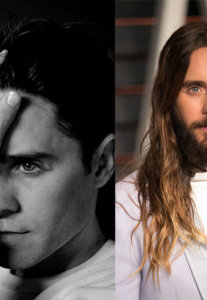