Khloe Kardashian filed for divorce from Lamar Odom last year following reports that he cheated on her with other women and had a severe drug addiction. The 30-year old reality star has now revealed that she knew about Lamar’s affairs long before the became public, but did everything to keep it a secret.

“I kept in hiding every time there was something going on. I would have to lie, or conceal, or cover up, and I’m so over it!” she says in a preview of the next episode of Keeping Up With The Kardashians.

“Last year on my birthday I lied to everyone because I had to lie and say I was with my husband when in fact my husband was missing with another girl!” she continued. Khloe finally decided to divorce Lamar in December 2013 after four years of marriage. She is currently dating rapper French Montana. 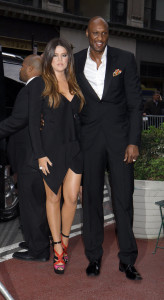