Scott Disick didn’t exactly jump up and down of happiness when he found out that girlfriend Kourtney Kardashian is pregnant with their third child . Scott reportedly said to Kourtney that he can’t handle more children, and she is now terrified that Scott will leave her when the baby is born.

“She’s terrified she’s going to end up a single mother, dumped in the delivery room,” a source close to the couple told Life & Style. “Kourtney will be left with three children and no one to father them.”
It also known that Scott has been having alcohol issues, and it was reported recently that he might be heading to rehab. Scott and Kourtney are already parents to Mason, 4, and Penelope, 2. 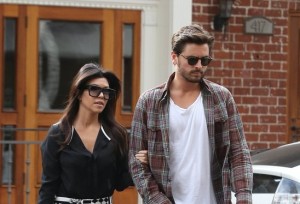