Nicki Minaj’s newly released “Anaconda” video has been the talking point of the week. The singer has now caused even more headlines after one of her background dancers rushed to the hospital after being bitten by

a real snake during the rehearsal of her MTV Video Music Awards performance on Friday. The female dancer was injured by a boa constrictor, used as props during the performance, and she was immediately taken to the hospital to examine the wound. MTV reports that the snake, which was removed from the area after the incident, is “in no way life-threatening, but scary.” Minaj’s rep has not commented on the incident yet but the dancer is reportedly doing fine. 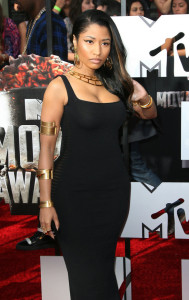 Kim Kardashian And Beyonce Avoiding Each Other At The VMAs