The youngest daughter of the Obama’s has decided to take a few days off at the beach.

While Barack Obama spends his last days as president in the famous residence, his youngest daughter, Sasha, chose to move away from the uproar that is the transfer of powers next January 20 to Donald Trump, and take a much deserved vacation with friends in Miami.

Recall that much was said about the absence of Sasha Obama in the last speech of her father as President of the United States, who, as explained by a senior government official, had not been able to attend because she had an exam the following day. But now it seems that the study days are behind her, as the 15-year-old can now take advantage of a few days off at the beach. So, Barack and Michelle’s little daughter was photographed in a bikini along with a group of friends, including the granddaughter of Vice President Joe Biden, Maisy, on a beach in Miami, Florida. Always escorted and protected by her security team, the young woman could be seen having fun under the sun. 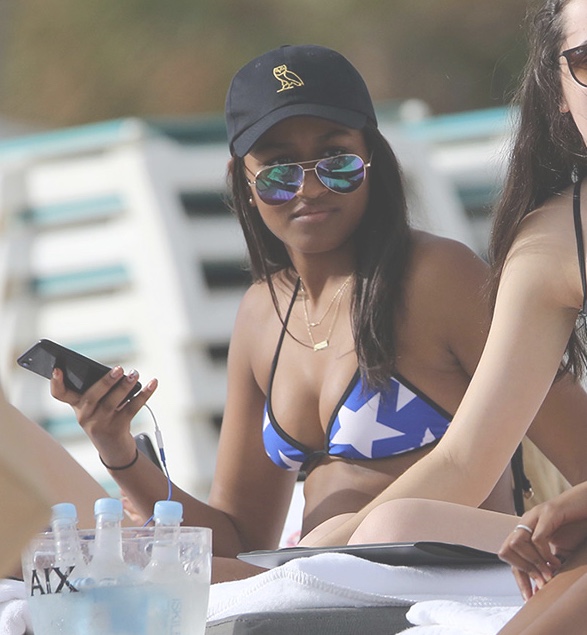 When they arrived at the famous presidential residence, Malia and Sasha were adorable girls of 10 and 7 years, respectively, and now they will become beautiful young women. Although it has been a long time since that day, this has not been forgotten. So the daughters of former President George W. Bush, Jenna and Barbara, who lived there before them, wanted to remember it by writing them an emotional letter that soon became viral.

“In eight years they have done a lot, they have seen a lot.” They stopped in front of the gates of the Robben Island jail where Nelson Mandela was imprisoned for decades, and traveled to Liberia and Morocco with their mother to talk to the girls about the importance of education. They attended state dinners, explored national parks, met international leaders … all while still girls, going to school and making friends,” wrote  Jenna and Barbara. They are about to graduate to a rarefied club, that of the former POTUS children,

Although Barack Obama will cease to be President next January 20, the family has decided to remain in Washington D.C. Until Sasha finishes her studies at the prestigious Sidwell Friends private school. On the other hand, Malia, who has already finished college last year, will begin studying at Harvard University after the end of the gap year she decided to take.

Celebrities will Demonstrate a day before Donald Trump's Inauguration.