Scott Disick is in trouble again. Last month the Keeping Up With The Kardashians star drank so much one night that he was taken to the hospital.

Disick went to a nightclub in The Hamptons on June 22, where he began binge drinking according to TMZ. Later on that same night he was so messed up he thought someone had drugged him. When Disick barely could put a sentence together, his friends brought him to the ER.

Scott was admitted and tested for drugs, but doctors concluded it was classic alcohol poisoning. The incident occurred days after his pregnant girlfriend Kourtney Kardashian threw him out of their Hamptons house. TMZ reports that Disick hasn’t had a drink ever since. 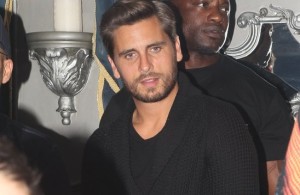 Report: Charlize Theron And Sean Penn To Wed This Summer

Katie Holmes On The Set Of Her New Movie