Is it time for Selena Gomez to say bye bye to Hollywood? At least if buddy Taylor Swift gets as she wants.

In an interview with E! Online Selena Gomez says that she loves to hang out in New York and that everybody always tells her that she’s more a New York kind of girl. And apparently Taylor Swift is constantly bugging her about moving to the city.

If Selena would find it hard to find an apartment she probably could stay with Taylor for a couple of days. Swift paid about $19.9 million for her penthouse in April so she should have an extra room to spare. 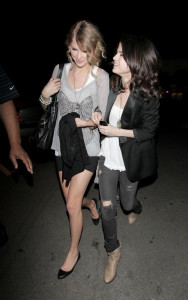 Kristen Stewart is Going for the Tomboy Look