A video has leaked online where Katy Perry is only 16 years old, long before she was a sexy pop star. The young girl was filmed by Jim Standridge, who shot more than 90 minutes of Katy’s first tour in 2001. The footage was edited down to a 13-minute clip, which has been released online.

In the video, Katy talks about Christian artists and how she has to put on a lot of make up because she’s a “pizza face”, and that she’s in ninth grade. 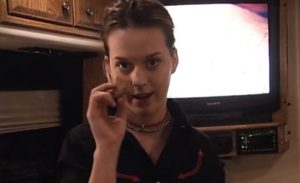