Longtime pals Selena Gomez and Demi Lovato are feuding again. The two stars, who’ve been close friends forevers, unfollowed each other on Twitter this weekend, after Gomez reportedly called Lovato a b*tch in a deleted tweet.

“Swimming away from the bullshit, bye b*tch,” Gomez wrote on Twitter, along with a photo of the Heart Attack singer swimming. Lovato immediately unfollowed her friend. Gomez and Lovato have been fighting numerous times over the years, and it is unclear why they’re feuding right now. 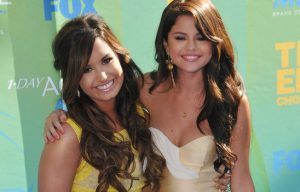 Kendall & Kylie Jenner's Book To Be Made Into Film